If you’ve finally got the idea and are ready to sit and start writing, you might need to take a look at this as well. The Ultimate Checklist and Character Development Worksheet will help you develop fictional characters your readers will love.

For instance, many authors out there will tell you that they had only a speck of idea when they started creating their character and that they “grew along the storyline”.

However, many young authors can’t begin to imagine what it’s like and they often think those who can build their characters along the way have some magical powers.

ALSO READ: How to Survive a Negative Book Review

Some authors “feel” their characters more and can connect with them on a deeper level. Many think about their fictional characters and keep them in their head all the time. However, this might seem tiresome to some people.

That’s why you can download this printable PDF and start using the character development worksheet instantly.

Sometimes Developing a Fictional Character is a burden

With Character Development Worksheet, it doesn’t have to be. You’ll have more fun selecting the descriptions of your fictional character and exploring all options.

Your character will be consistent if you keep it in front of you while you write.

If you are building a world with many different characters, this can point you in the right direction if you get lost while writing.

What you’ll find in the Character Development Worksheet

In the pages of Character Development Worksheet you’ll find:

The Character Development Worksheet is designed to be used with the lists that are written below.

Remember to combine this list with Character Development Worksheet to create a complex character.

ALSO READ: 4 Ways to Tap Into the Collective Unconscious for Inspiration

HAVE FUN: The A B C of Writing

Describe relations with other important characters

One more thing – in trying to make your character alive, make sure you don’t reveal all of his traits at once! Just like in life, where we slowly discover people’s motives and needs, fears and desires, in literature we must aim at slowing down and letting the reader decide how fast they will discover the characters.

Remember that there is no rush for you, the only one who can hurry is the reader with turning the pages of your book.

To achieve this, place your character in situations that will slowly reveal their intentions and needs.

Oftentimes you can even omit the complete description by just mentioning the most prominent feature. Also, the way you mention that feature can challenge the reader to skip the bedtime and finish your book.

You also don’t have to showcase a complete list of features every time your character shows. Pick a few traits which will resurface depending on the situation.

For example, let’s say your character is a long-haired young man with severe social anxiety, doesn’t drive, and is prone to night walks while listening to music on his headphones. You already introduced him, but later in the book, you can simply say:

“She was hurrying up, pausing from her graveyard shift to grab something to eat. The night was a peaceful one and while she sat in her car, waiting for the red light to change, she wondered what fast food place is still open.

The light turned green and her phone beeped, the picture of her boyfriend popping up. When she looked back on the street, a young man was in front of her car, appearing to be deaf, with his hands in his pocket and his hair in a long ponytail. She pressed the brakes but he ignored the whole scene, calmly passing to the other side of the street while his light was red.”

We know he’s not obviously deaf, he’s just listening to loud music. We know he has social anxiety, and we now wonder whether he will meet “her” again and if she will recognize him as “the guy I almost hit”. Will she cheat her boyfriend with him? Will he beat his social anxiety with her? Maybe they will need to work together but she can’t stand him being awkward?

Check out the Creators page . If you wish to be featured as an author (it’s free), read more and fill out this form. 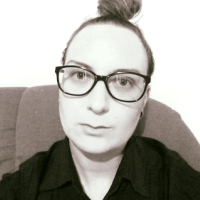